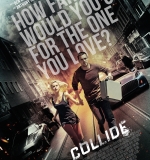 Nicholas Hoult and Felicity Jones run from danger in a new poster for their upcoming film Collide.

In the flick, Nicholas plays Casey Stein, who must go back to his old ways as a miscreant in order to make enough money for his girlfriend Juliette, played by Felicity, to get a kidney transplant.

Casey suddenly finds himself on the run from a ruthless gang headed by a mob boss and must find a way to protect Juliette before she is captured and held as ransom.

Collide is set to hit theaters on August 19.

« Rogue One: Star Wars prequel characters revealed as Darth Vader appearance teased | Disney reportedly orders re-shoots of Rogue One: A Star Wars Story after it fails to match up to Force Awakens »