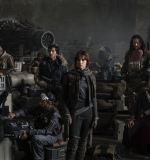 There was quite a bit of talk during Disney’s live-action presentation at the D23 Expo today about the importance of heroines. Well, if this first image of the cast of the upcoming Star Wars standalone film Rogue One is any indication, Felicity Jones’ (as yet unnamed) character might soon rise as the most badass member of those ranks.

The photo, the first released from the upcoming film, also confirms cast members Diego Luna, Ben Mendelsohn, Donnie Yen, Jiang Wen, Forest Whitaker, Mads Mikkelsen, Alan Tudyk, and Riz Ahmed. Still no word on what roles those actors will be playing, but the tale of Rogue One is one that takes place before Star Wars: Episode IV—A New Hope and follows a group of, yes, rougues who band together to steal the plans for the Death Star.

“It goes into new territory, exploring the galactic struggle from a ground-war perspective while maintaining that essential Star Wars feel that fans have come to know,” Lucasfilm president Kathleen Kennedy said in a statement.

Rogue One is being directed by Godzilla helmer Gareth Edwards, who greeted D23 fans via a video message from the film’s set. The movie hits theaters Dec. 16, 2016.